This is about a character design for League of Legends.  http://na.leagueoflegends.com/

I've decided to post some of the development work for both his concept and the illustration, to give people an idea of different options to show.

Viktor is a villain type character.  This is a version of him (called a reskin, which is not a new texture but a whole new mesh based on the same rig).  Fullmachine is the "evolved" version of Viktor, in which he has finally replaced his entire body with machinery.

Here is some text from the brief:

After years of perfecting his augmentations, Viktor has succeeded in fusing his soul with an efficient magical humanoid machine. He is made entirely of various metals, and no organic materials. Magic is bursting from within him, and his design is a lot more refined, while retaining the fantasy grungy feel.
Armour:   Refined, yet grungy. All metal. Keep it fantasy.
Body: Made entirely of metal, with magic emanating from holes, gaps and generators (No Jacket).
Cape: Segmented metal armour, like roman scale mail.
Colour: All dark and desaturated, except for bright green magic.

So the challenge is to make it a scifi-theme, but with more of a fantasy aesthetic.  So... steampunk!  :D


Finally, here's an HD video someone made of the character!  It's a hoot to see him animated after staring at a static drawing for hours.

So, the next order of business was the splash.  Splash art is used to promote new characters and their skin variations on Riot's website.  It's also a big part of their store.  They're important because the game makes its money on these microtransactions.  The left side has to be low contrast and somewhat negative space since that's where the character's info box goes.


This skin shows the future of Victor, where he has replaced all of his humanity with machinery. He is "complete". He should be portrayed standing grand and majestically, Lord of the machines! In the background is something almost like a throne room made of hextechnological machinery. The technology in the background should follow a similar style to what you see in his costume design, kinda chunky and heavy and not too sleek or hightech.

So again, the challenge is to create a setting that is both science fiction and fantasy at the same time.

They chose Thumb B.

So I ran with rendering up B.


So anyway, there you have it.

...since the last post.
I'm still a student at TAD.  Recently,  the first entertainment 2D semester ended.  2 more to go!

I started a paid internship with Massive Black Shanghai (later renamed to Brilliant Colors LLC).  I Just found out that ImagineFX magazine actually did publish a brief interview with me about it.  One of the reasons I haven't posted any updates is because most of the work I've been doing has been NDA.   All the work I've done for them so far has been for Riot Software (League of Legends). I've been doing splash illustration work for them, as well as character design (new characters and reskins).  There are now several people alongside me, most other TAD students.  We've had to learn to work as a group, passing different character designs and illustrations around.  Also learning about working with clients and getting used to making a lot of changes... it's been a tremendous learning experience.

I'm on break from that now, and my latest endeavor is to develop my own world as a mobile adventure game, 3D navigation style through 2D images, like the old game Riven, and release a book at the same time (marketing strategy).  Anyway, it's still in the planning stages.  I want to have a sketch-style working prototype within the next couple of weeks, and have already gotten a good start with the pitchdoc.  I'll be taking a break from art while I learn some scripting and work on some writing as well.

Also I'm catching up on TAD work I fell behind on when doing the Riot stuff, and will be posting that soon too.

Anyway, I hope all my online friends are doing well and have their own set of exciting developments. 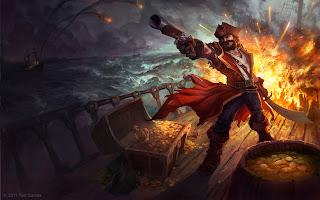 ^This is the first splash illustration I worked on for MB Shanghai (Brilliant Colors), for League of Legends (Riot).
http://na.leagueoflegends.com/
The original purpose of this illustration was to promote the re-designed Gangplank character and replace the old splash art.
I worked in it in a collaboration with Jon Neimeister (http://andantonius.deviantart.com/) and Alex Konstad (http://akonstad.deviantart.com/)  under a tight deadline. Trying to be efficient with 3 people on 1 piece without "too many cooks in the kitchen" is challenging but can also be really rewarding. We all had a hand in it during all stages of the process. When you take out the lack of sleep and a few annoying client changes, it was a "blast" ^hahaha^
----------------------------- 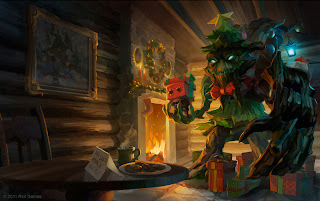 Another splash, later done for League of legends' "Snowdown" event. This is the Christmas themed skin obviously. I didn't design the reskin
It was tricky because Maokai is a complicated, sort of "messy looking" character. Also, they wanted him in a cozy christmas living room, but since LoL is a fantasy game, I had to make it look recognizable but still not modern. Log cabin seemed to work as a bridge between modern and fantasy. It had to look cozy, but also dark and creepy. I dunno, maybe it's too dark.
Anyway, if you notice the painting on the wall to the left, it's actually Riot's 2011 Christmas login screen
I did this one on my own, though I got feedback from the group, including our art director, Randis Albion.
Anyway, Riot ended up making changes to this before it actually went on the website. This is what it ended up looking like: http://riot-web-static.s3.amazonaws.com/media/snowdown_showdown/skins/Maokai_Snowdown.jpg

I prefer the original better so that's what I posted


Anyway... there's a good bit more Riot stuff where that came from!
Posted by Kirsten Zirngibl at 6:09 PM No comments:

Unfortunately, I can't share everything I'm doing at TAD.  (Two of the major projects we've worked on, plus my recent internship with Massive Black Shanghai.)  But I do have a great figure painging class with Jon Foster, so here's some of the stuff I've done for it so far.

Posted by Kirsten Zirngibl at 6:12 AM 2 comments:

Another thing I did this past summer was the TAD workshop!  Busybusy... Anyway, it was a great experience, and brought back memories of the 2009 Illustration Academy.

It was also great to be able to meet some of my classmates (and teachers!) from the previous spring's semester in person.  Though it seems like everyone in my group went to last December's workshop instead...

I didn't really go out and experience Kansas City, due to having no transportation and being busy with the workshop.  But that's OK.

Anyway, the main project we had that first week was to design a new character class for Team Fortress 2.  Much of it was about paying attention to silhouette, making the character unique from the others in shape, but fitting in with them well.  Just like the IMC, we had so many demos and lectures going on, plus figure drawing, so it was hard to get a whole lot done.  But honestly, it's more about learning than producing.

Here's what I ended up with (orthos were done later though): 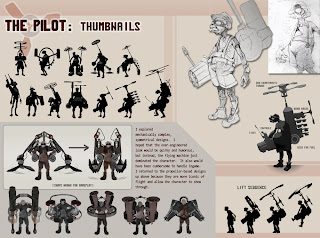 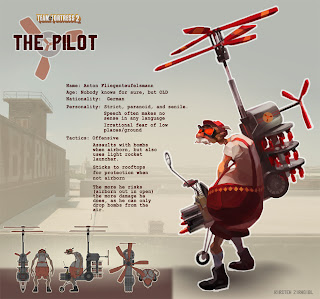 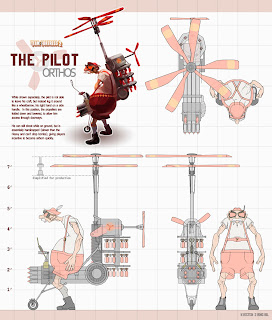 I had to leave halfway through the workshop, so there were two other projects I missed, but I'll take what I can get!


Posted by Kirsten Zirngibl at 4:16 AM No comments: